On 25th January Coventry University’s Vice-Chancellor and CEO Professor John Latham was officially recognised by BCS the Chartered Institute for IT for his career-long services to IT, that have had lasting impact locally in Coventry and Warwickshire, but also nationally and internationally. The award was presented at Coventry University in the presence of current and former colleagues from Coventry University and Trustees and directors from BCS. 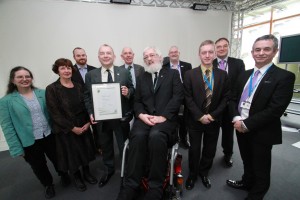 The award of Honorary Fellowship of BCS acknowledges the exceptional contributions made by John since he first graduated from Coventry Polytechnic in 1983 with an honours degree in computer science.  In the last two years under John’s leadership Coventry University has received a number of national honours, the most recent and prestigious of which was Times Higher Education’s University of the Year 2016 Award, presented in November 2015.

Co-nominator for this award Deputy Vice-Chancellor Ian Marshall MBCS, said that ‘John has more than amply demonstrated the value of Computer Science as a first degree; the analytic and problems solving skills that are at the core of the subject which along with his entrepreneurship, vision and drive have benefited not just Coventry University but the wider community. While academic management is the day job it is not hard to get him leading discussions about the latest developments in technology, computing or new ways to improve systems’.

Current chairman of BCS Coventry branch Irene Glendinning FBCS, who put together the nomination, said she was delighted that BCS had confirmed John’s suitability for this prestigious award. When welcoming the attended guests, BCS Vice President and Trustee Iain Thompson explained that at most one Honorary FBCS is awarded each year for exceptional service to and dedication, therefore John is now a member of a very select group of people, as can be seen on the BCS web site: http://www.bcs.org/content/conWebDoc/1648 , and his record of achievement will be a hard act to follow.

On collecting his award, Vice-Chancellor John Latham said:  “I’m both flattered and delighted to receive this Honorary Fellowship from BCS. When I started out computing and IT in general were often regarded as specialist, niche subjects. That’s no longer the case – at least not to the same extent as before – and the fact is that information technology impacts on almost all aspects of our daily lives.”

“The landscape has changed now and young people in particular are very IT literate – you only have to look at our students for evidence and that applies to students across all disciplines. There are many reasons for this culture shift but as a tireless champion of IT, BCS has undoubtedly played its part.”