Home News Looking back at my ‘Golden Ticket’

Looking back at my ‘Golden Ticket’

As you may know in 2017 was the sixty year anniversary for the founding of BCS. As part of the year-long celebrations member groups were invited to nominate individuals to attend a special lunch at St James’s Palace, hosted by HRH The Duke of Kent. I was nominated by my colleagues from the BCS Coventry Branch committee, based on various voluntary activities I’d been involved in over many years with BCS, and was fortunate enough to have been one of the 50 people selected to attend the event. On the 21 st November 2017, accompanied by my husband Guy, I joined the other guests at the entrance to St James’s Palace. 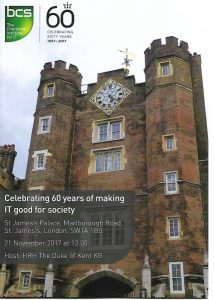 Being in this historic setting was a great privilege. Unfortunately we were not allowed to take photographs, but I hope this scan of the programme will help to set the scene. We had the drinks reception in the Queen Anne Room before the lunch was served in the Picture Gallery: the walls were filled with a range of interesting pictures and some historic portraits of members of the royal family (please follow the link below). I was seated next to former BCS president Roger Marshall and our table was adjacent to the host’s table. Roger remembered well his visit to Coventry in 2012 to support Challenge IT when he was Vice President.

After a very enjoyable lunch BCS President Paul Martynenko joined our table to tell me about his very positive experience as a young undergraduate at Lanchester Polytechnic, when computer science was taught at the Rugby campus, the department was transferred to Coventry shortly after that time. Roger said that he especially remembers being taught programming by Dr Alkis Stavrinides, which helped to shape his future career. He asked me to pass on his regards to everyone who remembers him from that time.

The event is commemorated on the BCS web site: https://www.bcs.org/content/ConWebDoc/58843

I am very grateful to have been given the opportunity to attend this event and will remember it as a very important highlight in my life.

Thanks very much to the BCS colleagues who put in the nomination and those who supported me.